Once the medieval capital of Ireland, Kilkenny City has a rich heritage, visible through its narrow streetscapes, historical buildings and landmarks. The city’s origins predate existing medieval landmarks.

The Cathedral was built in the 13th century and is a showcase to ornate stonemasonry skills. Saint Canice (who gives Kilkenny its name) founded a monastic settlement here in the 6th century. The 9th century round tower is a remaining monastic landmark (and which you can climb).

The Black Abbey was established in 1225 as one of the first houses of the Dominican Order in Ireland. Among the highlights are sepulchral slabs, stone carvings and sculptures. Also of note is the great rosary window. Today, visitors can view the buildings, which date from the 13th to the 16th Century.

Strongbow, the legendary Norman invader, built a fort in the 12thc on the site where Kilkenny Castle stands today. William Marshall (Strongbow’s son-in-law), fortified the city walls, built a stone castle on the site and consolidated the Norman’s position of power in the city. See drone footage here

Today, the city prides itself on its lively culture and entertainment scene with a range of live music and theatre events available throughout the city’s pubs and music venues.

Kilkenny is also renowned as a world class craft centre, which has its origins in the Design workshops of the late 1960s’, the story of which can be explored in the Castle Yard site, opposite the Castle. 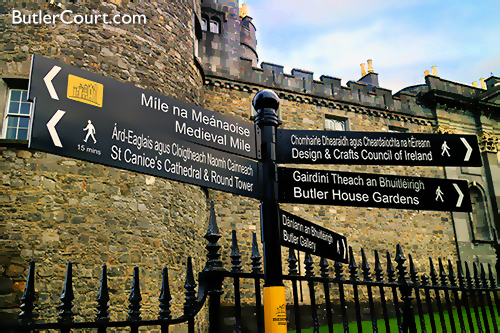 One of the best and unique features of Kilkenny City is its compactness, allowing you explore everything it has to offer on foot. Just be sure to allow yourself enough time to experience it all. Enjoy our city! 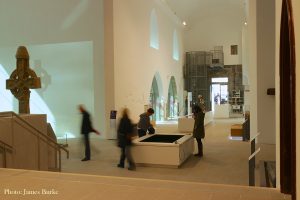 Nestled in the centre of Ireland’s Medieval Mile, Rothe House and Garden is one of Kilkenny’s hidden gems. Built between 1594 and 1610, this was the home of the renowned merchant, landowner and Mayor of Kilkenny City, John Rothe Fitz Piers. Rothe House is the only remaining example of it’s type in Ireland and the last Burgage Plot & garden to survive within the city walls.

The courthouse is in the historical centre of the town. It was originally built over, and incorporated the remains of, a sixteenth century castle and an eighteenth century Gaol. It was converted to a courthouse in c.1792 and remodelled in c.1828 and extended to the rear in c.1870.

Jerpoint Abbey is a ruined Cistercian abbey, founded in the second half of the 12th century, near Thomastown, County Kilkenny, Ireland. It is noted for it’s stone carvings and has a good visitor centre and seasonal guided tours. From Kilkenny take the R700 south to Thomastown. Then cross the bridge and take the R 448 south. Jerpoint Abbey is 2 kilometres on your left. GPS: 52.510898, -7.157764

A few more places to visit:

Drone video, filmed at the amazing Kells Priory in County Kilkenny, built in 1193 AD. Defensive structures were added in the turbulent 15th Century.

Kilkenny is noted for the concentration of craft makers. Here are just a few worth visiting. Kilkenny Craft Trail linked here